Our research focuses on the understanding of the basic biological processes that shape organisms and on how we can take advantage of this knowledge. We are studying how processes such as RNA and protein homeostasis shape cells, and how these scale up to control development.

We use a wide array of tools and pursue multilevel and multidisciplinary approaches, ranging from the organismal level down to single molecules (…and vice-versa). We exploit advanced imaging methods, biochemistry, molecular biology, genetics, and genome editing.

We use the basic research model plant Arabidopsis thaliana and we translate our findings into important crops such as rapeseed (Brassica napus) and tomato.

Role of proteolysis in cell fate

Fate determination of cells depends on asymmetric cell division that regulates stem cell fate, differentiation, and even regeneration. Asymmetric cell division relies on cell polarity. Cell polarity refers to a set of mechanisms that establish and maintain specialized domains within a cell or the plasma membrane. It is suggested to have evolved from archetype machinery responsible for restricting senescence to one daughter during division by enabling the differential segregation of damaged material. One of the most important functions of cell polarity is the control of asymmetric cell division which has a fundamental role in the control of cell fate. Furthermore, cell polarity distributes signaling components on the plasma membrane and this is important as membranes connect the cell interior with the environment. The establishment of cell polarity is achieved through protein and vesicle trafficking along the cytoskeleton.

We discovered that at the cellular level protein asymmetry (i.e. protein-membrane polarity) can also be achieved by the selective cleavage of proteins at the apical or the basal side of the cells. We identified the protease separase in Arabidopsis thaliana as an important component in this process (Plant Cell 2013 25(6):2171-86). We showed that separase forms a complex with cytoskeleton-based molecular nanomachines known as kinesins (Dev Cell 2016, 37(4):350-361). Kinesin and separase collaborate to control cytoskeleton dynamics, cell polarity, and division, thereby affecting cell fate and division fidelity.

In these works, we developed tools, such as inducible lines with depleted separase, which will enable us the identification of novel cell polarity components. We recently obtained a high-resolution map of polarity effector components required for polarity establishment. We now focus on the elucidation of the function of these components.

We thus aim at understanding the fundamentals of cell polarity, stem cell maintenance, and membrane organization. Some of the questions we try to address are: How these processes are linked to the cytoskeleton? How cell polarity is regulated? Are there new players in cell polarity machinery that remain elusive?

Phase separation in development and stress

Our recent work revealed that transcriptome remodeling during heat stress is intimately connected with the formation of microtubule-based phase-separated cytoplasmic ribonucleoprotein (RNP) complexes called stress granules (SGs) and processing bodies (PBs) (Plant Cell 2015; 27: 926-43). Although both types of RNP complexes are present under stress conditions, they serve distinct functions. While SGs are thought to play a role in sequestering, stabilizing, and storing mRNAs and translation factors, the main function of PBs is attributed to translational repression and mRNA decay. While much progress has been made in understanding how SGs and PBs control stress tolerance, substantial gaps remain in our knowledge. We discovered that PBs are intimately linked to the kinesin-separase complex by direct interaction. As RNPs are important throughout plant development and during stress, manipulation of RNPs could conceivably find diverse applications. For example, manipulation of PBs activity may allow greater control over diverse processes such as developmental transitions; alternatively, it might be used to improve stress tolerance in a variety of crop species. 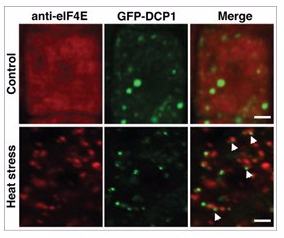 Furthermore, we study RNP complexes that undergo phase-separation in the nucleus. Many cellular structures are assembled via phase separation, forming liquid-like droplets in a manner analogous to oil in water.

Factors regulating the dynamics of chromatin structure in the nucleus have a direct impact on the expression of genetic information. Cohesin is a multi-subunit protein complex and represents a proteolytic target of KISC. Cohesin is crucial for pairing sister chromatids during cell division, DNA repair, and regulation of gene transcription and silencing. We discovered that cohesin is loaded on chromatin by the Scc2-Scc4 complex (also known as the NIBPL-MAU2 complex) in plants (J. Cell Sci. 2017 130: 1051-1063). The NIBPL-MAU2 complex is indispensable for cell fate establishment during early stages of embryo development. NIBPL-MAU2 mutants show fate reversion of the terminally differentiated suspensor cells of the embryonic tissue. Our findings have established the NIBPL-MAU2 complex as an evolutionary conserved machinery controlling cohesin loading and chromatin structure maintenance, and provide new insight into the plant-specific role of this complex in controlling cell fate during embryogenesis.

In this project, we aim at achieving a comprehensive understanding of the composition and functions of cellular and nuclear RNP complexes.

Brassicaceae [mustard] family includes >3,300 species, with many economically important vegetable crops, e.g. cabbage, broccoli, cauliflower, turnip, rapeseed, mustard, radish, horseradish, cress, wasabi, watercress, Arabidopsis and rapeseed. Rapeseed is an important allotetraploid oilseed crop, with important economic relevance in providing biodiesel, vegetable oil, and meal for animal feed with a close relationship to Arabidopsis. This relationship is wonderfully fortuitous; fundamental knowledge produced using Arabidopsis can be directly translated in breeding B. napus and by extension many other important crops, especially vegetables. Thus, rapeseed is now regarded as an important model for crops. Because B. napus is a tetraploid species, it represents an excellent model for studying means to overcome complex genetic traits or for producing allelic variation using the recent advancements in genome editing methods. Our group exploits the power of the editing method of CRISPR/Cas9 to produce allelic variants and mutants to complement natural allelic variation, in an attempt to improve rapeseed (Dev Biol 2018 pii: S0012-1606(17)30760-1). We also attempt to develop new approaches for genome editing.

In this project, we are focusing on the control of pathways that could improve the resilience of rapeseed to environmental perturbations and improve its biomass. 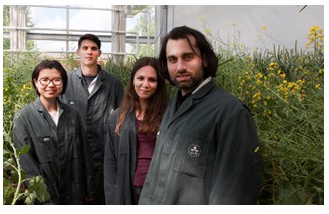 Our team in 2017 harvesting rapeseed.